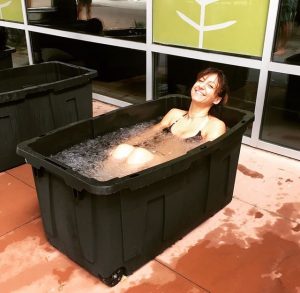 If you’ve taken a class with me, you probably know I love the heat.  And as strong of a love as I have for the heat, I have had an equally strong hatred of the cold.  It’s been a fact of my life for as long as I can recall that I don’t do the cold.  Then three weeks ago, I decided to do the cold in a major way by signing up for a Wim Hof Method workshop in Austin, Texas.  The Wim Hof Method has three pillars – breathwork, cold exposure and commitment.  You do the breathwork; you expose yourself to ridiculously cold conditions (since we were in Austin that meant ice baths); and then you commit to doing this work consistently and earnestly over a long period of time.

Leading up to the training, I was incredibly excited to learn all about Wim Hof’s amazing breath technique and practice it.  The putting on my bikini and hopping in an ice bath though – so incredibly NOT excited for that part.  Leading up to the training, Freida kept suggesting that maybe I at least try showering in cold water, but even the thought of that made me cringe.  I kept telling Freida – I don’t do the cold.

Fast forward to November 20 in front of a big group of my fellow Wim Hoffer’s –  I dropped my towel and stepped into the ice bath.  Immediately it felt like the wind got knocked out of me. The teacher looked at me and told me to breathe: “Inhale and exhale.  Inhale and exhale. Just stay with it.”  And I did – I breathed and I relaxed (kind of) and when the timer went off to mark the end of my ice bath, I got out of it and I felt amazing.  Since that weekend whether I feel like it or not (and usually it’s not) I get into my shower, blast the cold water and breathe.  And I stay.

That little weekend away got me curious about what else I’ve always simply said “I don’t do” rather than encountering the awkwardness and discomfort of actually doing it.  First up on my list after the cold was expressing my needs – something I don’t do because I also don’t do not being liked by everyone. So I emailed all the Homegrown teachers and told them that I can’t keep up with all my text messages – I asked if instead they could please email me with anything that is non-urgent.  That might not be a big deal for most people but for someone that doesn’t do boundaries, that was really uncomfortable for me AND I now know I can do it.

If you’re like me, you may have a long list of I don’t do’s – I also don’t do professional networking events; I don’t do raw tomatoes; I don’t do early mornings; I don’t do math… I  mean I could really keep going but I’ll stop now. My resolution for the New Year though – start really looking at my “I don’t do’s” and figure out if they are really just “I’m scared of it being hard or different.”  Because if that’s the case, I’m learning with certainty that challenges are something I definitely do.

And PS… if your “I don’t do” is yoga, I would love to help you challenge that one!  See you on your mat soon!